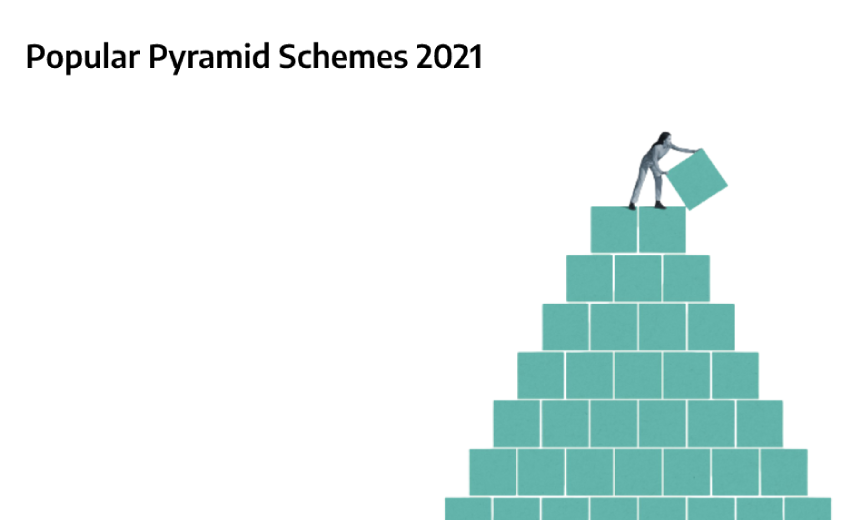 What Is a Pyramid Scheme?

A pyramid scheme is an unsustainable, illegal business model in which profits made are typically derived from investment principles or membership fees rather than from underlying investment gains. It is frequently marketed as a foolproof method of turning a small amount of money into large returns.

Companies that run Pyramid schemes generate the majority of their income by recruiting new members as agents or distributors for their network. For such companies, earnings from selling their goods or services would be minimal. Typically these MLM companies take money from new members and provide it to existing members as their compensation. A pyramid scheme is a tricky business model that persuades its customers or members to join schemes that can exploit them.

What is the difference between Pyramid Scheme and Multi-Level Marketing?

A multi-Level Marketing company focuses on selling its products and services to more customers by promoting them through distributors spread around the world. These distributors get compensated for selling the company product as well as for recruiting new distributors under them. They also get a part of the profit from the sale made by the distributors they recruited.

On the other hand, companies that follow the Pyramid scheme focus on making money through recruiting more people as distributors. Their product or services would mostly be nonexistent or not of much popularity or highly-priced.

Companies that Shut Down due to Pyramid Schemes !! BurnLounge Inc was an online music store MLM company established in 2004. It was later investigated and sued by the federal trade commission. The Company had a policy in which customers have to purchase a subscription and then sell them through their music sites.

The Federal Trade Mission blamed BurnLounge for carrying out a pyramid scheme and that it paid more for customers selling subscriptions than for selling music. FTC filed a suit against BurnLounge in 2007 and BurnLounge lost the suit in 2012 and again lost its appeal in 2014.

Fortune Hi-Tech Marketing was an MLM company that was founded in Lexington Kentucky in 2001 by Thomas Mills and Paul Orberson. Their products include a diverse range of products which include mobile phone services, satellite television services, and hair care products. They paid its distributors 0.25% to 1 % on products they sold. Fortune Hi-Tech faced charges filed by the state of Montana for being a Pyramid scheme and had to pay $1 million as settlement. They were also sued by the states of North Carolina, Kentucky, and Illinois. Federal Trade Commission by accusing it of being a Pyramid scheme. Fortune Hi-Tech was found skeptical because they paid its agents more for recruitments rather than sales of their products and services. This showed practices of the Pyramid scheme.

United Sciences of America was also an MLM company that was on the verge of shutdown by the late 1980s. The USA was strongly accused of carrying out a Pyramid scheme and The company later went bankrupt in 1997. It manufactured nutritional supplements like Master Formula, Formula Plus, Energy Bar, and Calorie Control Formula and reached its customers via network marketing. But due to the public scrutiny of accusing it to be a Pyramid scheme, it went bankrupt in 1997.

Metabolife was an MLM company formed in 1990 by Michael Ellis. Their most popular product was Metabolife 360 which is an ephedra-based product and happened to kill a few of its consumers. Such reasons and blame for it being a pyramid scheme brought it down to the ban and dissolution of the company in 2005. There were also charges for income tax evasion on the company. Michael Ellis was a former law enforcement officer on probation charges.

Sunshine Empire was an MLM company that was founded in 2006. The company was suspected of imitating fraudulent schemes such as the Ponzi scheme and pyramid scheme. Singapore Police’s Commercial Affairs Department sued it for fraud and falsifying accounts. Later in 2009, the MLM company had to dissolve.

Nouveau Riche was an MLM company that is based on real estate investment courses. This MLM company was sued by Arizona Corporation Commission and nearly $6 million was charged from Nouveau Riche for defrauding over 100 investors by using an unregistered deed of trust investment. The company was accused of being a Pyramid scheme and was closed in 2010.

Vemma was an MLM company that sells nutritional supplements and vitamin drinks that include an energy drink, meal replacement shakes, and weight loss products. Vemma majorly targeted college students and so them as easy money. In 2015 Vemma was charged by the Federal Trade Commission for engaging in Pyramid schemes. It accused that Vemma targeted more and compensated mainly for enrolling new affiliates rather than compensating enough for selling their products. In 2016 it reached a $238 million settlement with FTC and had to close down.

TelexFree is a multibillion-dollar MLM company based in the US that portrayed itself as an Internet Phone service company. Its operations in Brazil were best known and popular. But later an investigation in the United States confirmed that it was built on a Ponzi scheme. Prosecutors described TelexFree as the company that has carried out the largest fraud in those times as it affected around 1 million victims across various countries.

Monavie was a Multi-Level Marketing company based in the US that manufactured and sold products that were made from blended fruit juice concentrates, powders, and puree. In 2015 this MLM company was sued for being a Pyramid scheme and was charged 182 million US Dollars for its fraudulent schemes.

WakeUpNow was founded in 2009 by Troy Muhlestein and was a Multi-Level Marketing Company that dealt with selling health and financial Management. The company was later found to employ a Pyramid scheme and had to cease its operation in 2015.