Is MLM or Network Marketing Legal in the US ? 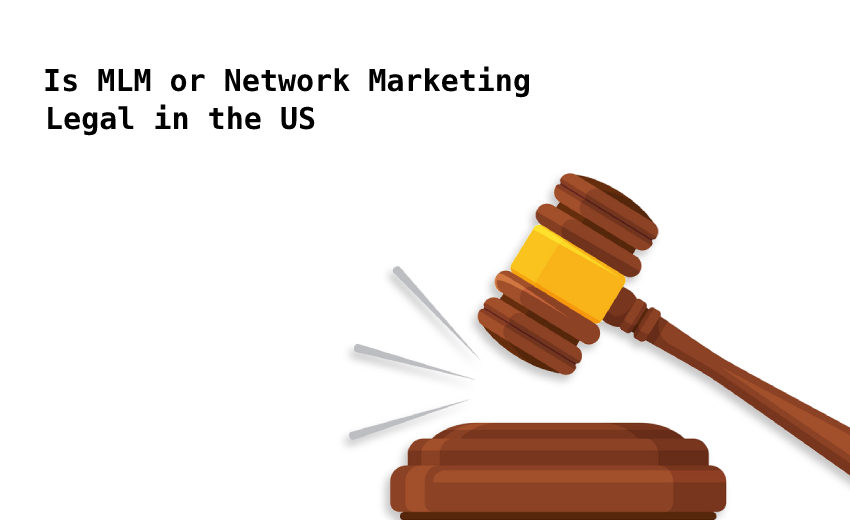 Yes, Multi-level Marketing is legal in the US if network marketing companies comply with the regulations and guidelines around their operations specified by bodies of the US government.

Network marketing companies have a complicated structure and operations, which makes their details very subtle to be understood by ordinary people and too hard to supervise by higher authorities. This makes it very difficult to understand whether an MLM business has a real product or service and if its operations are legitimate.

To help the general public properly distinguish between the real MLM companies from pyramid schemes, the US Government has established bodies like the Federal Trade Commission and Securities Exchange Commission to supervise their operations.

MLM Companies in the US:

To back a bit, Multi-Level Marketing or network marketing is a business model in which the company makes a profit either by selling its products or services or by recruiting other people as distributors to the network.

In the US network marketing is legal as “affiliate marketing “ in all 50 states and is called “Home-based Business Franchising”. But the US strictly criminalizes and makes it illegal for all MLM companies to exercise pyramid schemes.

The Federal Trade Commission warns “Not all multi-level marketing plans are legitimate. Some are pyramid schemes. It’s best not to get involved in plans where the money you make is based primarily on the number of distributors you recruit and your sales to them, rather than on your sales to people outside the plan who intend to use the products.”

Why are Pyramid Schemes Dangerous?

Pyramid schemes are dangerous because it strictly depends on the commission made by new recruiters. They do not have any real product or service. The money obtained from new joiners is given as compensation to those in the up lines. Which eventually makes those in the downlines have very less chances to get compensated and get scammed.
It is said that 99 % of MLM participants are said to have lost money after subtracting all expenses and purchases made with the company
The FTC has sent out warning letters to many MLMs during the pandemic over their earnings and product claims suspecting them of carrying out illegal schemes.

This has to lead the US Government and its bodies to provide the following advice and guidelines to separate the businesses from Pyramid schemes. A few are listed below

US Guidelines to Avoid Pyramid Schemes:

The Federal Trade Commission has not wholly banned MLM companies in the US. But they had from time to time expressed strong advice to be followed by the general public to avoid getting scammed by a pyramid or Ponzi schemes that pose as MLMs

MLMs are not entirely regulated even though FTC and Securities Exchange Commission has some supervision over them. But now there are moves to bring more guardrails over them. One such move is to make the Business Opportunity Rule cover MLM companies as well.

FTC introduced the Business Opportunity Rule a decade ago to describe a set of requirements that needs to be followed by people who try to get others involved in their business opportunities. This rule demands to communicate all the information that is needed to assess a specific business opportunity to be communicated with clarity. This makes the individual offering such opportunities to provide information supporting their income claims.

Chances of MLMs coming under the Business Opportunity Rule in Future:

More regulations on MLM in Future:

Even though the majority of the highest-paid network marketers are from the United States, many others have failed in the same industry. When people were previously harmed by MLM frauds, they were too embarrassed to make complaints about it. People’s attitudes have shifted, and they are now demanding for additional legal frameworks to prevent MLM organizations from engaging in criminal schemes and activities.

In the United States, network marketing is a huge moneymaker. There is a long list of MLM companies with headquarters in the United States that are well-known internationally.
Many Americans have prospered from the direct selling industry, while others have been duped by the deceptive pyramid and Ponzi scams masquerading as MLMs. MLMs are not banned in the United States. However, the government has created a slew of laws and guidelines to protect the general population from being duped by fraudulent schemes.